The Junior Social Service League of Des Moines was founded in 1926 by Ruth Wallace-Wijkman and 10 other charter members. Like many League founders and members at that time in history, Ruth was a well-educated society woman who came from a family of affluence and influence: her father had been the U.S. Secretary of Agriculture, and her brother, Henry, would also serve in that same role and go on to become Franklin D. Roosevelt’s Vice President. Ruth attended both Iowa State University and Goucher College in Maryland, where she was a member of Pi Beta Phi at both schools. Upon her return to Des Moines, she gathered 10 of her fellow society friends to establish a Des Moines chapter of Junior League and set to working on improving their community through philanthropy and voluntarism.

Ruth Wallace-Wijkman, founder of what is now Junior League of Des Moines

One of the first community projects JLDM took on was the Junior League Convalescent Home for Children. This was a collaborative project with other groups and still exists today. Ruth lived a long life, passing in 2002 – a few short months before her 101st birthday. Before her death, she was able to see the Convalescent Home flourish into the medical nonprofit ChildServe, which serves thousands of families with therapy services, residential services, short and long term medical care services, and a myriad of other services for medically complex children and young adults. 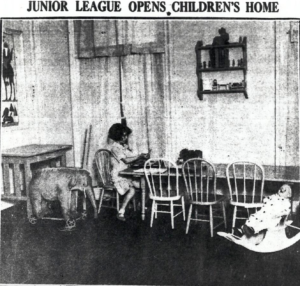 Since its inception in 1926, the Junior League of Des Moines has dedicated itself to building a better community in Des Moines.  From our beginnings caring for and educating children recovering from diseases like rheumatic fever and polio at the Junior League Convalescent Home, to our wide-ranging efforts to expand the cultural opportunities for children in Des Moines through theater and radio programs; from the Des Moines Art Center and Living History Farms, to taking up shovels and hammers to build a playground for kids at the South Side YMCA in 2010; from giving a $50,000 endowment to a safe house for survivors of human trafficking, to monthly activities with the young women at Youth Emergency Shelter and Services starting 2018, the Junior League of Des Moines has always been ready to step up to a challenge – and we’re just getting started! 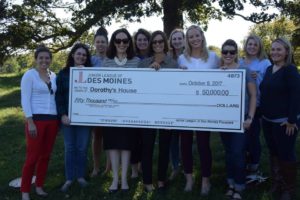 Currently, the Junior League of Des Moines community focus is on foster care youth in the metro, particularly girls and young women in the system. Additionally, JLDM is focused on developing and creating the next generation of community leaders through AJLI trainings and local events aimed at cultivating the individuals who will shape Des Moines’s future.

The Junior League of Des Moines, Inc. is an organization of women committed to promoting voluntarism, developing the potential of women, and improving community through the effective action and leadership of trained volunteers.

By continuing to use the site, you agree to the use of cookies. more information